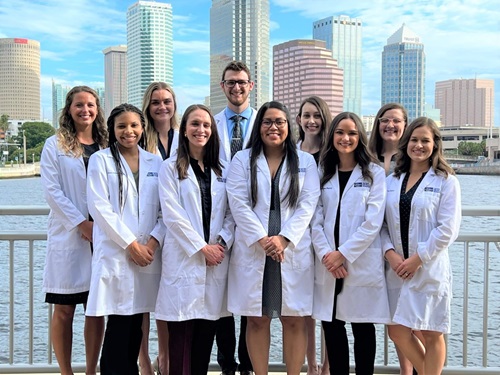 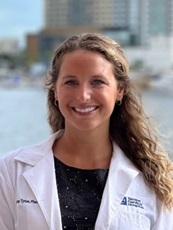 Brittany was born and raised in Lynchburg, Virginia. She graduated with a Bachelor of Science in Forensic Science from Liberty University while also playing for the Liberty beach volleyball team. She then moved to Winchester, Virginia to pursue a Doctorate of Pharmacy and Masters of Science in Pharmacogenomics and Personalized Medicine at Shenandoah University Bernard J. Dunn School of Pharmacy. Throughout pharmacy school, Brittany enjoyed holding leadership positions in Phi Lambda Sigma, Rho Chi, Class of 2021, American College of Clinical Pharmacy, Christian Pharmacists Fellowship International, Phi Delta Chi, the Student Society of Health-System Pharmacists, and the American Society of Health-System Pharmacists. In her free time, she enjoys playing and coaching beach volleyball, venturing to new restaurants and travel locations, attending sports events and concerts, and spending time with her family and friends. Brittany is thrilled to continue her clinical training as the PGY2 Critical Care resident at Tampa General Hospital upon completion of her PGY1 residency. 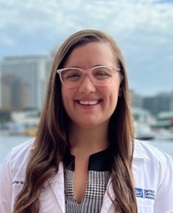 Heather was born and raised in Lebanon, Pennsylvania. She completed her undergraduate studies and received her Doctor of Pharmacy degree from The University of the Sciences in Philadelphia. While in pharmacy school, she was actively engaged in the Student Society of Health-System Pharmacists, Pennsylvania Pharmacist Association, and the Cooper Rowan Student-Run Ambulatory Care Clinic. Heather also worked as an intern at Pennsylvania Hospital where she grew to love clinical pharmacy practice. She completed her PGY1 residency at Einstein Medical Center in Philadelphia where she was further drawn to emergency medicine as she participated as part of the hospital's Stroke, Resuscitation, and Code blue teams. Outside of work, Heather enjoys spending time with her friends and family, exploring different restaurants, and traveling to new places. She is honored and excited to pursue her passion in emergency medicine with the Tampa General Hospital team! 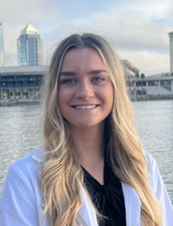 Chandler was born and raised in the small farm town of Flushing, Michigan. She moved to Detroit to attend Wayne State University with aspirations of completing pharmacy school. Before pharmacy school, Chandler worked at an independent specialty pharmacy. During this time, she grew to learn that she was more passionate about clinical pharmacy practice. Chandler transitioned to an intern position at the Detroit Medical Center where she worked part-time throughout pharmacy school. In her free time she enjoys traveling, hanging with her dog, Lou, staying active outdoors, and trying new restaurants with friends and family. Chandler is excited to continue her pharmacy training as the PGY2 Ambulatory Care resident upon completion of her PGY1 residency at TGH! 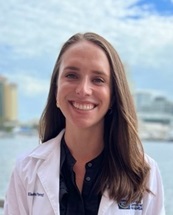 Elise grew up in Tampa, Florida. She completed both her undergraduate studies and her Doctor of Pharmacy Degree at the University of Florida. During pharmacy school, she was an active member in many professional organizations such as the Pediatric Pharmacy Association, American Pharmacist Association-Academy of Student Pharmacists, Student Ambassadors, and Rho Chi Honor Society. Additionally, Elise was an intern at SinfoniaRx where she developed a passion for educating patients about their medications and chronic disease state management. In her free time, she enjoys spending time with family and friends, going to yoga classes, and cheering on the Gators. After completing her PGY1 residency at TGH, Elise is excited to continue her clinical training as the PGY2 Solid Organ Transplant resident! 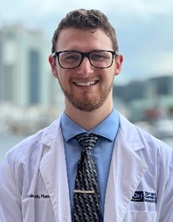 Austin was born and raised in Jacksonville, Florida. He completed both his under-graduate studies and Doctor of Pharmacy degree at the University of Florida. During pharmacy school, Austin played an active role in the Student Society of Health-System Pharmacists, Kappa Psi Pharmaceutical Fraternity, and Rho Chi. He was also a student ambassador and class representative. It was during his experiences working at SinfoniaRx and Baya Pharmacy where Austin prioritized patient centered care, and this continued while completing a majority of his P4 rotations at Tampa General Hospital. During his time outside of pharmacy, Austin loves to cook, play golf, and watch football. He also loves to spend time with his friends and family soaking up the Florida sunshine. Austin is so excited to stay at Tampa General Hospital and continue his Tampa pharmacy journey for another year, exploring his interests in critical care and solid organ transplant. 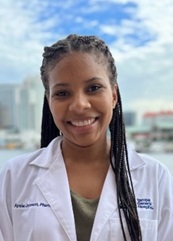 Aysia was raised in Miami, Florida. She received her undergraduate degree from Florida State University before pursuing her Doctorate of Pharmacy at the University of South Florida. During pharmacy school, she was active in several student organizations including BRIDGE Healthcare Clinic, Phi Lambda Sigma Pharmacy Leadership Society, and served as the president of Kappa Psi Pharmaceutical Fraternity, Inc. In her spare time, Aysia enjoys reading, engaging with the jump rope community, and traveling with family and friends. Aysia is excited to join the Tampa General family to train and pursue her passion of transplant medicine. 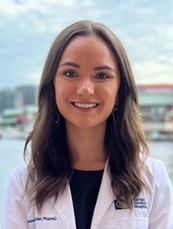 Jaleesa was born and raised in Tampa, Florida. She obtained her Bachelor’s degree in Exercise Physiology at Florida State University and then returned home to attend the University of South Florida to obtain her Doctor of Pharmacy degree. Jaleesa loves using her knowledge of exercise physiology to counsel patients on the importance of lifestyle modifications for the management of various disease states. Throughout pharmacy school, Jaleesa worked at Tampa General Hospital as an inpatient pharmacy intern and as a supplemental instructor for the university. She was an active member in various student organizations including Kappa Epsilon Professional Pharmacy Fraternity and the American Pharmacists Association Academy of Student Pharmacists. In her spare time, Jaleesa loves to spend time with family and friends, go to indoor cycling classes, try new restaurants, and spend time at the beach. Jaleesa is very excited to continue growing as a clinical pharmacist at Tampa General Hospital! 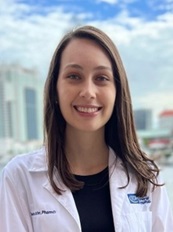 Tasha is originally from Panama City, Panama. She grew up in a military family and has lived in several different states, including Tennessee and Hawai’i. She completed both her undergraduate and pharmacy degrees at the University of South Florida. Throughout pharmacy school, she worked as an inpatient pharmacy intern at Tampa General Hospital and held leadership roles within the Hispanic Association of Pharmacists and BRIDGE Healthcare Clinic. She was also an active member in several professional organizations including Phi Lambda Sigma, Rho Chi Honor Society, and the American Pharmacists Association – Academy of Student Pharmacists. During her free time, she enjoys baking, being outdoors, spending time with her family and friends, and watching TV with her schnauzer, Sofi. Tasha is thrilled to continue her clinical training at Tampa General Hospital and pursue her passions in Solid Organ Transplant and Ambulatory Care! 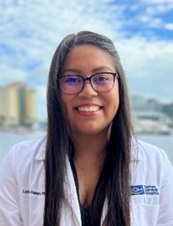 Lizbeth Haker was born in Mexico and raised in Clearwater, Florida. She is completing her Doctor of Pharmacy degree at the University of Florida - Gainesville campus. She was an active member of various professional organizations such as Phi Lambda Sigma Pharmacy Leadership Society (PLS), American College of Clinical Pharmacy (ACCP), American Pharmacists Association – Academy of Student Pharmacists (APhA-ASP), Equal Access Clinic Network (EACN), Phi Delta Chi Pharmacy Fraternity (PDC), and Student Ambassadors. She also held pharmacy intern positions at UF Health Shands and BayCare St. Anthony's Hospital throughout pharmacy school. During her free time, she enjoys spending time with family and friends, traveling, and trying new cuisines. She recently traveled to Washington D.C. in March where she got to see snow and the cherry blossoms (definitely not the weather she was expecting for March). Additionally, she and her husband just celebrated their six-year wedding anniversary this April (04/22)! After completing her longitudinal fourth-year APPE rotations at Tampa General Hospital, she is so excited to be back for her PGY1 Pharmacy Residency training and join the TGH team! 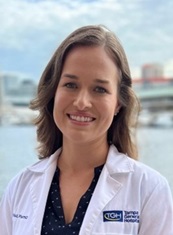 Kylie was born in Colorado and raised in Tampa, Florida. She graduated with a bachelor’s degree in Nutritional Sciences from the University of Florida in 2018 and will graduate with her Doctor of Pharmacy degree and Personalized Medicine certificate from the University of Florida College of Pharmacy in May 2022. During pharmacy school, Kylie was an active member of Rho Chi Honor Society and held leadership positions in the Student Society of Health-System Pharmacists (SSHP), Florida Society of Health-System Pharmacists (FSHP) Member Affairs Council, Pediatric Pharmacy Association, and American Pharmacists Association Academy of Student Pharmacists (APhA-ASP). Additionally, Kylie worked as a pharmacy intern at UF Health Shands Hospital in Gainesville, Florida throughout pharmacy school. In her free time, she enjoys exploring new restaurants, spending time with friends and family, and running on Bayshore Boulevard with her dog, Bentley. Kylie is excited to continue her clinical training as a part of the Tampa General Hospital team!